On a gloomy and wet autumn evening, swarms of wizards, superheroes, and book characters seek shelter from the rain in one of the world’s most hallowed places; the library. Lanterns lead the way as thousands of book lovers and adventurers arrive for the first annual Wizards & Wands Festival in 2018. 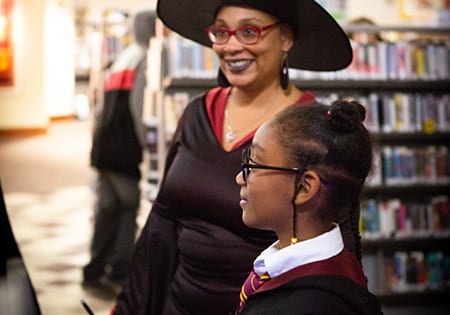 With lights dimmed and cozy music swelling overhead, the library is quickly transformed from a bright and bustling hub of information to a magical wonderland filled with otherworldly delights. Once inside, heads immediately turn to the cavernous ceiling in the atrium, aglow with stars. Giants and ghosts loom large as costumed stilt walkers amble by. A stone statue comes to life, delighting unsuspecting visitors as they walk up the sweeping staircase.

The whole place is buzzing with excitement. A toddler watches in awe as a magician disappears a playing card while a professional illustrator teaches a handful of budding artists to conjure monsters and critters with a few flicks of the pen. 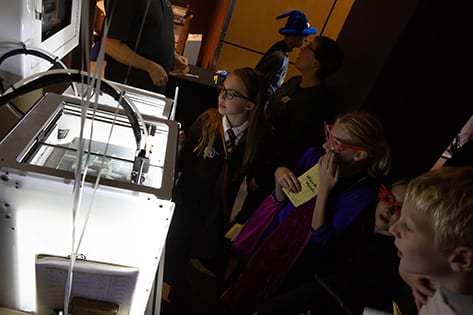 Upstairs, a group of kids dressed as Hogwarts students marvel as a house crest slowly takes shape on the glass plate of the library’s 3D printer. Meanwhile in the meeting rooms, a parent and child learn how to make a “bloody” handprint change colors by painting it with ammonia and lemon juice.

While libraries are often portrayed as dusty warehouses full of old books and bespectacled shushers, the Westerville Public Library is embracing a new reputation – as a real-life magic school. According to librarian and lead event planner Annamarie Carlson, “Last year we started this event to celebrate the 20th anniversary of Harry Potter, one of the most popular book series in the world. But the event quickly grew to celebrating the magic of libraries.” 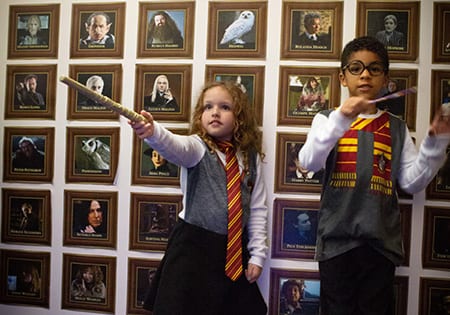 To those who have never been inside, the building looks deceptively small when viewed from State Street. But after four major expansions, the library is currently a sizable 102,300 square feet. Some of the renovations have created fun anomalies, like a staircase that leads to nowhere and a 5-foot courtyard that can only be accessed through a door in a closet, like the wardrobe in Narnia. And connecting an old 1800s house that acted as the Anti-Saloon League headquarters resulted in a ½ floor reminiscent of the movie Being John Malkovich.

But the real magic of the library has nothing to do with the building itself. “We see magic happen here every day. I got online for the first time – before Google, before Yahoo! – at this library. For a 17-year-old who grew up with a typewriter, that was magic. For others, it’s learning how to email a distant loved one or discovering 3D printing and virtual reality. For little ones, it’s reading a book for the first time. The library is often the gateway to these experiences and every time you see it happen, it makes the impossible seem possible,” says Tamara Murray, Marketing Manager for the Westerville Public Library.

The library is now looking to rekindle the magic of their inaugural Wizards & Wands Festival on October 25. “We had such an amazing response from the community in 2018. Over 2,300 people attended, some of who had never been inside the library before. Families stayed all night, exploring every nook and cranny of the building. This year is going to be even bigger, with 14 different artists, entertainers, and organizations scheduled to perform,” says Erin Francoeur, Executive Director 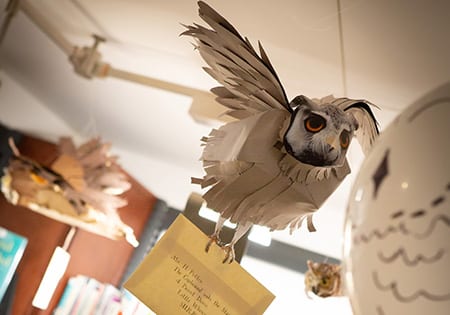 Not only that, but a 30-foot, smoke-breathing dragon named Hilda will be perched on the library’s roof, keeping a watchful eye on State Street. Designed and created by The Point at Otterbein University, Hilda is an art installation made of steel, wood, vinyl, foam, and latex. The Friends of the Westerville Public Library - a volunteer organization that helps to raise money through book sales and a gift shop – eagerly sponsored the opportunity to bring even more attention to the Wizards & Wands Festival and to Uptown Westerville’s Midnight Madness event happening that night. 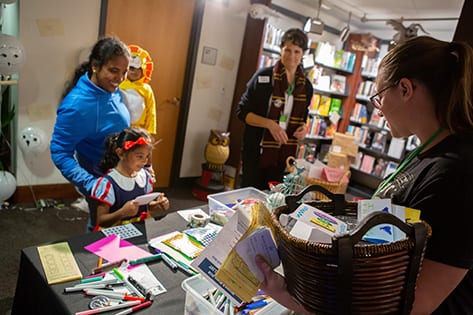 When asked what makes this experience unique, staff said it’s the attention to detail. Currently stored in an affectionately named “room of requirement”, hundreds of cauldrons, brooms, birdcages, teacups, and other props have been gathered from all over town, including many decorations handmade by staff and volunteers. “This is an immersive experience that brings together the entire library, the local community and the Uptown area. It’s a way to celebrate the town and to celebrate a book that’s remained relevant for over 20 years,” says librarian Michala Sage.

The goal is not only to offer a fun experience but also to give people a way to escape reality for a night. Carlson remarked, “The fact that you can wander through a wizarding village in your own backyard for free - that’s a huge way for us to give back to our community.” 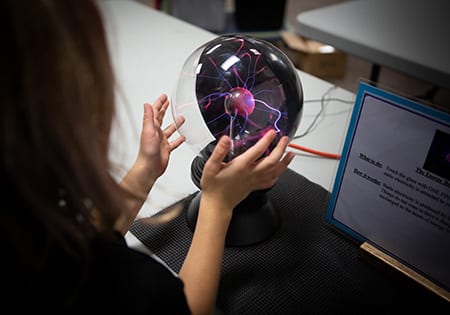 Even if you’ve never read Harry Potter and the Sorcerer’s Stone and Halloween is your least favorite holiday, there will still be plenty to entertain the entire family. “If you know and love Harry Potter, you get it. But this goes far beyond the wizarding world. There’s bugs and stilt walkers and wood carving and science experiments and music. It’s like you’re stepping through the pages of a book,” says Robin Gibson, Youth Services Manager.

Libraries are filled with stories, and this is one you don’t want to miss.

For more information about this year's event, visit westervillelibrary.org/wizards.

Previous
Next
We welcome your respectful and on-topic comments and questions in this limited public forum. To find out more, please see Appropriate Use When Posting Content. Community-contributed content represents the views of the user, not those of Westerville Public Library