Many in Westerville’s early Black community worked as servants and laborers on white-owned farms. Some of Westerville’s African American residents found other creative ways to use their talents, forging their own career paths.

Joseph Milbert Williams was a man of many talents. As a teenager, he labored on Leroy Budd’s farm. He forged a more intellectual path as an adult, serving as a preacher and gaining a popular reputation as a political activist (see the Civil Rights & Activism section).

But Williams also continued to work with his hands and literally helped build Westerville as we know it today. He worked as a printing press operator for the Public Opinion newspaper, a brick maker for Everal Tile, and a stone mason who helped construct Cochran Hall at Otterbein.

Henry Fields was an important part of Westerville’s social scene in the 1880s. Fields was unique – at a time when most African Americans living the community were laborers or servants, he was a business owner. Ads for his Little Queen Barber Shop regularly appeared in the local newspaper. People living and working in town could pop into his Little Bonanza Restaurant for oysters, eggs, sandwiches, or meat. Fields also catered special meals for Civil War veterans’ groups and other local organizations like the Colored People’s Beneficial Society. 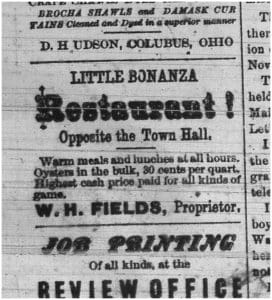 Carl L. Brown, a 1934 graduate of Westerville High School, opened Columbus’ first black-owned supermarket. Brown remembered, “They taught us we could go out and get a job anywhere. After I finished high school, I went to one of our larger plants and was told I couldn’t be employed because I was a Negro. That was the biggest slap in the face I ever got.”

Brown did find a job at a grocery store but decided to be his own boss after a supervisor accused him of ignoring a customer & called him a racial slur. He began selling fruits & vegetables out of a Model T pickup before renting space at a market. In 1969, he opened the Carl L. Brown IGA Foodliner, which became an important part of the community for many years.