The Paving of the 3-C Highway Is Celebrated

The Paving of the 3-C Highway Is Celebrated

In the 1920s, as the importance of the automobile was growing, a cry arose among citizens and newspapers around the state: “Get Ohio out of the mud.” In 1922, the state legislature committed funds to brick the 3-C Highway which links Cleveland, Columbus and Cincinnati. It runs through Westerville (we refer to it as State Street or Westerville Road).

When the road was finished between Cleveland and Columbus, Westerville was chosen to be the site of a huge celebration. On June 24, 1924, people came from all along the northern route of the highway and gathered in Westerville for a parade with floats representing many communities.

For decades cars traveled to the Ohio State Fair and to Ohio State football games on the 3-C Highway passing through Westerville. The businesses in the community benefited from the traffic generated by this heavily traveled route. One popular restaurant, Williams Grill, served lunch to travelers on their way to OSU football games and dinner to families who spent the day at the Ohio State Fair. Waiters and waitresses pocketed a lot of tip money on the days of those special events!

In the 1960s, I-71 was built, bypassing Westerville and many of the other towns along the 3-C Highway. Traffic on the 3-C diminished and some towns lost businesses and population.

Just fine the way they are : from dirt roads to rail road... 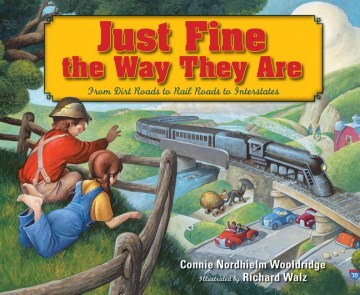 Just fine the way they are : from dirt roads to rail roads to interstates