Citizens were amazed in 1899 when a horseless vehicle, an automobile, rolled into town. Before long several families in Westerville had decided to invest in this new mode of transportation. Some of the first auto owners were J. A. Weinland and the Schrock family. 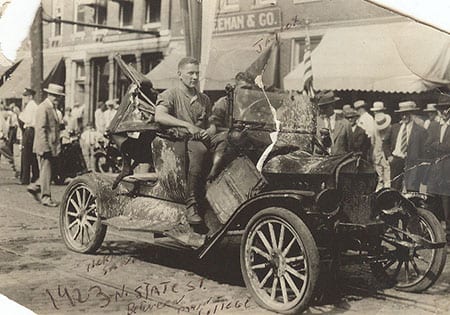 Black and white photograph of Dale Jaycox driving a car on State St. between College and Main St, 1923

The automobile was traveling on the roads built for horse traffic. Citizens of Westerville took notice of the poor condition of the streets when Otterbein University threatened to move to Dayton, Ohio if road paving and improvements to drinking water were not funded. Paving of the streets began in 1903. Bricking the streets was the most desirable method of paving. Today, there are still brick streets around the campus of Otterbein. 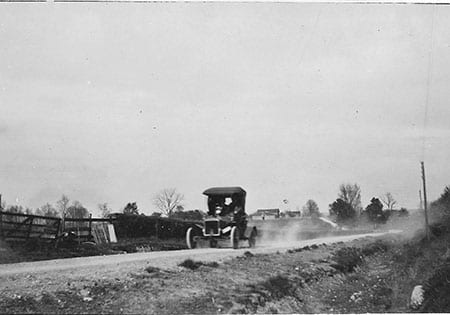 Black and white photograph of an automobile on a dirt road, circa 1900

By 1908, the local newspaper was demanding that the mayor and marshal do something about speeders on State Street who were driving their cars faster than 15 miles per hour! New types of businesses began to appear. Blacksmith shops which did business with the owners of horse-drawn vehicles were soon out of business as more and more cars appeared on the streets. Gas stations were built to provide fuel for the cars, repair shops for automobiles sprang up and even auto dealers opened to sell new and used cars to residents. By 1916, village residents owned 94 automobiles - one auto for every thirty people.

As more cars were purchased and roads improved, the need for the train and the trolley diminished until both disappeared.