Discover the records and publications of one of the most influential forces for social reform during the late 19th and early 20th centuries. The Temperance and Prohibition Movement attracted wide public support through several important organizations who eventually succeeded in placing a national prohibition amendment in the Constitution.

With access to 500,000+ pages of historical records, this is one of the largest collection of Temperance and Prohibition materials in the world.

This collection was digitized in partnership with the Ohio History Connection, ProQuest, University of Michigan, and Women's Christian Temperance Union archives.

Note: Free online remote access to this collection is temporarily provided by ProQuest in appreciation for the Westerville Public Library's partnership and effort in this project. 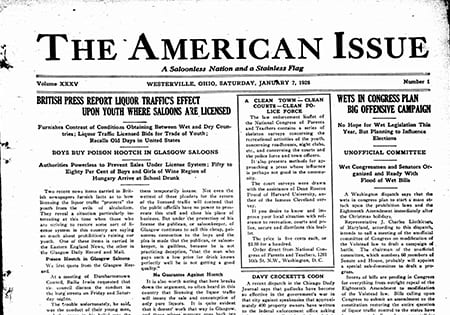 This collection highlights the active role played by women in the Temperance Movement placing it within the context of national and international temperance efforts.

Didn't find everything you needed yet? Continue your research.
View All View All

View more about Logging In