Indentured servitude functioned as an alternative to slavery in Westerville.

Samuel McDannald’s family moved to the Central College area from Bath County, Virginia in 1813. By 1817, he had inherited two enslaved half-brothers named Jack and Benjamin Lee from an aunt in Virginia, Elizabeth McDannald Sitlington. Sitlington provided Benjamin and Jack with $15 each and gave them a pass that permitted them to travel through Virginia. Her will also instructed that McDannald was to free Benjamin and Jack when they turned 25.  However, a judge told McDannald that under Ohio’s constitution, he could not legally keep the two teenagers as slaves.[1]

Instead, McDannald indentured them for roughly four more years, until their 21st birthdays - the maximum amount of time he could legally control their labor under Ohio law. Although no longer enslaved, Benjamin and Jack were not technically free either. McDannald was to provide food, clothes, shelter, and reading and writing lessons but would not pay them for their work. The teenagers did not sign or mark the indenture themselves, perhaps implying that this arrangement was made without their consent. Even if they were given a choice, it is impossible to know whether they agreed of their own volition or whether they gave their answer under duress.[2]

When an individual signs a voluntary contract to work for someone for a certain number of years (usually seven) without pay as a way to pay off debts, in return for free passage to the North American colonies from Europe, or to learn a trade. 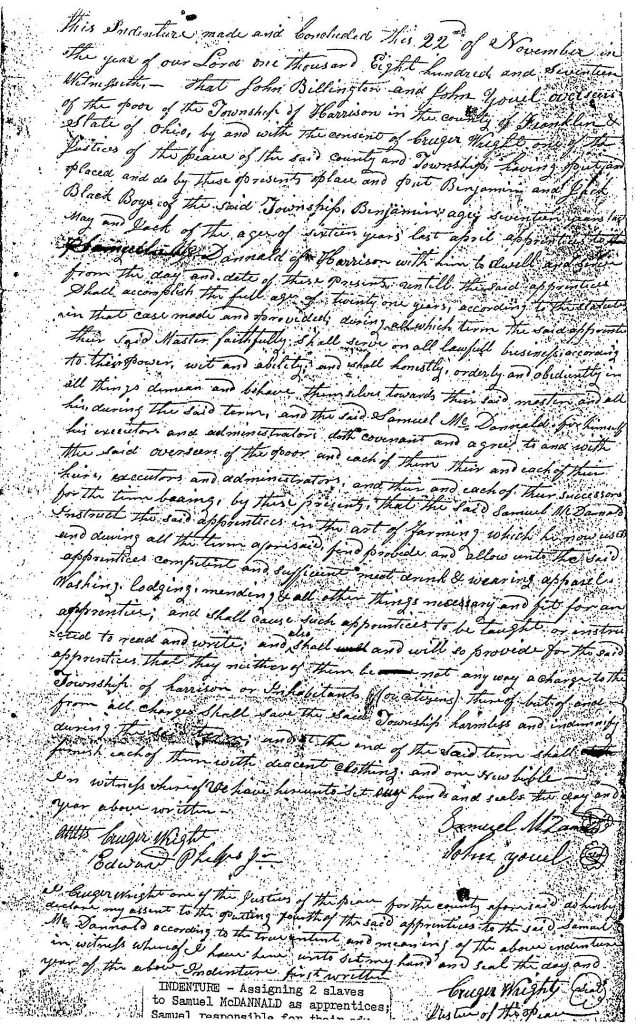